According to Jeff Zrebiec, Ravens OT Adrian Ealy has been suspended six games for violating the NFL’s performance-enhancing substance policy. 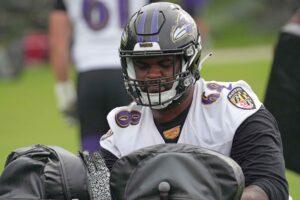 Zrebiec adds the suspension will continue through November 22, at which point Ealy can return. The undrafted rookie has been on Baltimore’s practice squad.

Ealy, 22, signed with the Ravens as an undrafted free agent out of Oklahoma following the 2021 NFL Draft. Baltimore waived him coming out of the preseason, however, and he returned to their practice squad.

During his four-year college career, Ealy appeared in 28 games and made 23 starts, the majority at right tackle. He was second-team All Big-12 as a senior.