Ravens GM Ozzie Newsome mentioned on Thursday that there’s still a chance that LB Brendon Ayanbadejo could be brought back at some point this offseason.

“As a team, we place a high value on special teams, and Brendon was one of our top performers in that area for the last five seasons,” said Newsome in a statement released. “He was one of the best special teamers in the league, but he was also a valued member of our defense, especially in our sub (substitute) packages. He became a leader for us, and the door may not be closed to bring him back to help us again.”

Pro Football Talk is reporting that the Ravens have released LB Brendon Ayanbadejo.

There were reports from a few months back that suggested that Ayanbadejo could end up being a cap casualty, but there wasn’t a lot of buzz surrounding the idea in the past few weeks.

Ayanbadejo, 36, signed a three-year worth $3.21 million last season, but was relegated to playing just 190 snaps for the Ravens last season. He graded out as an above-average linebacker in coverage, but this was obviously a limited sample size. 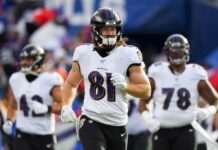 171,363FansLike
7,623FollowersFollow
252,046FollowersFollow
© NFLTradeRumors.co is an independent news source and has no affiliation with the National Football League (NFL), NFL.com, or any team(s).
wpDiscuz