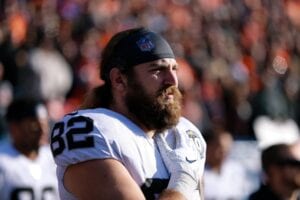 Tomlinson had been on and off of the Ravens’ practice squad in recent weeks, but it appears as though they plan to carry him on the active roster from here on.

Tomlinson, 28, originally signed on with the Eagles in 2015 as an undrafted free agent out of UTEP. He was unfortunately among their final roster cuts, but later signed a future/reserve deal with the Texans.

Since then, Tomlinson has played for a number of teams including the Jets, Giants, and Patriots before catching on with the Raiders last December. He returned to the Giants this past March and has been on and off of the Ravens’ practice squad in recent weeks.

For his career, Tomlinson appeared in 34 games and caught 17 passes for 194 yards receiving and one touchdown over the course of four seasons.