According to Pro Football Talk, Dolphins owner Stephen Ross is the driving force behind Miami’s interest in trading for Texans QB Deshaun Watson. 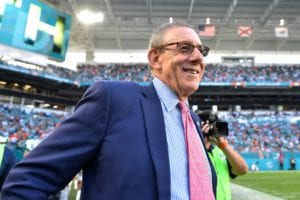 Barry Jackson of the Miami Herald confirms PFT’s report, saying they alluded to it in a previous report about someone high in the organization finding the idea of trading for Watson appealing.

He adds the Dolphins are primarily waiting for Houston’s price to come down to a point where a trade makes sense given the uncertainty around Watson’s legal situation.

A team source told Joe Schad that Ross does not force football decisions and he believes in incumbent Dolphins starting QB Tua Tagovailoa. Miami apparently sent out a mass email calling PFT’s report “inaccurate” but did not specifically rule out interest in Watson, per Jackson.

Trade speculation for Watson bubbled up over the weekend, with Charles Robinson of Yahoo Sports reporting the Dolphins have emerged as the “frontrunner” in trade talks with the Texans for Watson.

However, no trade involving Watson appears to be imminent, for now.

It should be mentioned that the serious accusations against Watson have yet to be resolved. He’s facing 22 civil cases right now and it remains to be seen how all of this plays out.

Watson has had an odd summer that has consisted of him serving as the Texans’ No. 4 quarterback and seeing time at running back in safety while sitting out a good majority of practice while his situation plays out.

The NFL hasn’t placed him on the commissioner’s exempt list, but their investigation into the allegations against him is ongoing as well.