According to Derrick Gunn, Eagles G Isaac Seumalo will likely miss the rest of the season with broken bones in his foot. 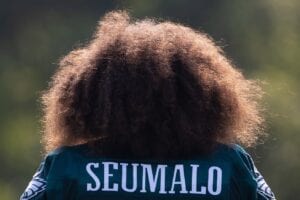 Seumalo had to be carted off of the field late in Monday night’s loss to the Cowboys. It’s another hard blow for the veteran who missed seven games in 2020 with an injury as well.

Expect the Eagles to place him on injured reserve shortly.

In 2021, Seumalo appeared in three games for the Eagles, making three starts for them at left guard.