Jeff McLane of the Philadelphia Inquirer, citing NFL sources, reports that Jason Peters wants to be paid like a starting left tackle if he’s going to replace Andre Dillard at left tackle for the 2020 season. 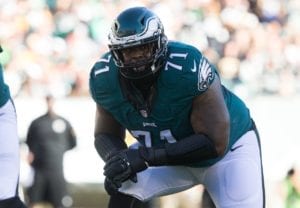 Eagles HC Doug Pederson told reporters on Saturday that Peters was “in the conversation” to play left tackle, but that they will look at some younger options.

“Jason Peters is obviously in the conversation,” Pederson said. “We do have some young players, Jordan Mailata, Matt Pryor. Jack Driscoll, who’s a [fourth-round] rookie, obviously, but has been playing some tackle for us.”

For what it’s worth, Pryor opened Saturday’s practice at left tackle for the Eagles.

Philadelphia signed Peters to a one-year, $3 million contract with the intention of him playing right guard and replacing Brandon Brooks, who suffered a torn Achilles a few months ago.

Philadelphia brought Peters back on a one-year, $3 million contract this past June.