According to Tom Pelissero and Mike Garafolo, Saints C Erik McCoy has a calf strain that is expected to keep him out for some time. 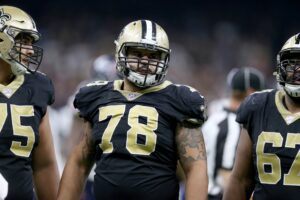 The Saints have a bye in Week 6 and the two says McCoy could be sidelined until after then.

That would make injured reserve a strong possibility for McCoy and the Saints. He would have to miss three weeks minimum but he would not count against the roster.

The Saints are working out veteran C Austin Reiter for additional depth while McCoy is out.