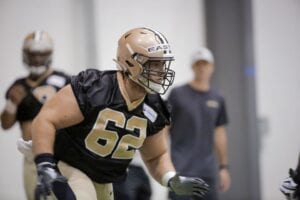 Releasing Easton frees up $5.87 million of cap space for the Saints.