Field Yates of ESPN reports that the Saints recently signed LB Demario Davis to a one-year extension. He’s now under team control through the 2024 season and can make $14 million, which consists of a $10 million base salary, a $2 million roster bonus and $2 million in incentives. 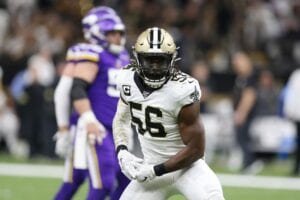 The Saints specifically added $2 million of incentives from 2022-2024 for a maximum total of $6 million.

This move has no cap impact on the Saints’ 2022 salary cap, according to Yates.

Davis, 33, is a former third-round pick of the Jets back in 2012. He spent four years in New York before signing a two-year, $8 million contract with the Browns that included $4.2 million guaranteed in 2016.

Davis was traded to the Jets in return for S Calvin Pryor back in 2017. From there, he signed a three-year, $24 million deal with the Saints a year later.

Davis was in the final year of his contract when he agreed to a three-year contract worth $27 million and includes $18.35 million guaranteed back in 2020.

In 2021, Davis appeared in all 16 games for the Saints and recorded 105 tackles, three sacks, and seven pass deflections.