According to Jeremy Fowler, the Saints are working out veteran LBs Anthony Hitchens, Jon Bostic and Kiko Alonso on Thursday. 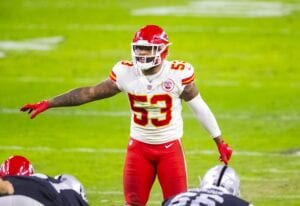 That’s quite a serious lineup for a training camp workout, with all three established veterans with multiple seasons of starting experience under their belt.

New Orleans is evidently serious about improving their depth at linebacker.

Alonso, 31, is a former second-round pick of the Bills back in 2013. The Bills traded to the Eagles in return for RB LeSean McCoy back in 2015.

From there, Alonso was traded to the Dolphins along with Byron Maxwell back in 2016 in return for a first-round pick. Miami later traded him to the Saints for OLB Vince Biegel at the start of the 2019 season.

Alonso agreed to a restructured contract in 2020 after tearing his ACL but was traded to the 49ers later in the season as a part of deal involving LB Kwon Alexander. San Francisco later released him.

In 2019, Alonso appeared in 13 games for the Saints and recorded 31 tackles, no sacks or interceptions and one pass defense.

Hitchens, 29, is a former fourth-round pick of the Cowboys back in 2014. He signed a five-year, $45 million deal with the Chiefs in 2018 that included $25 million guaranteed.

Hitchens was entering the final year of that deal and was set to make a base salary of $7.8 million in 2022 when the Chiefs opted to release him earlier this offseason.

In 2021, Hitchens appeared in 15 games for the Chiefs and recorded 80 total tackles, no sacks, one interception and two pass defenses. Pro Football Focus had him rated as the No. 53 linebacker out of 87 qualifying players.

From there, Bostic agreed to a two-year contract with the Steelers in 2018, but was released during the 2019 offseason. Bostic caught on with Washington in May and re-signed on a two-year deal the following offseason. He was allowed to walk as an unrestricted free agent in 2022.

In 2021, Bostic appeared in four games for Washington and recorded 22 total tackles with no sacks or interceptions.