The Seattle Seahawks are signing WR Marquise Goodwin, according to Michael-Shawn Dugar. 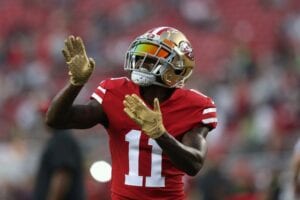 Goodwin will fill the team’s open roster spot and will add another deep threat to the team’s offense.

Goodwin, 31, is a former third-round pick of the Bills back in 2013. He spent four years in Buffalo before signing a two-year contract with the 49ers worth up to $8 million.

Goodwin was set to make just $1.45 million for the 2018 season when he agreed to a three-year, $20.3 million extension with $10 million guaranteed. He was later traded to the Eagles.

Goodwin was then released by the 49ers after reverting back to their roster from the Eagles after the conditions of their 2020 trade weren’t met.

From there, Goodwin signed a one-year contract with the Bears last offseason. He became an unrestricted free-agent in March.