According to Adam Schefter, the Seahawks are planning to hire Rams’ passing game coordinator Shane Waldron as their next offensive coordinator. 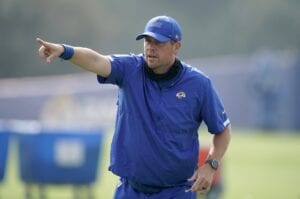 He takes over for former OC Brian Schottenheimer after his contract with Seattle was terminated earlier this month.

Waldron, 41, began his coaching career with the Patriots as an offensive quality control coach in 2008 before bouncing around the college ranks with UMass from 2012-2015.

Washington signed him to become their offensive quality control coach in 2016 before joining the Rams in 2017 as their TEs coach. He was soon promoted to passing game coordinator the following season.

This will be his first offensive coordinator job in the NFL.