Ian Rapoport of NFL Media reports that Seahawks RB Chris Carson is expected to have season-ending surgery for a neck injury he’s been dealing with and will be placed on Injured Reserve. 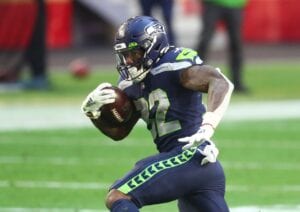 Carroll did, however, say that he’s confident Carson will be back for the 2022 season.

Seattle designated Carson to return from injured reserve last week, but his neck injury clearly wasn’t responding as they had hoped.

Carson was testing the open market as an unrestricted free agent this offseason but opted to re-sign with Seattle on a two-year $14.625 million deal.

In 2021, Carson has appeared in four games for the Seahawks and rushed for 232 yards on 54 carries (4.3 YPC) and three touchdowns to go along with six receptions for 26 yards receiving and no touchdowns.