Veteran TE Luke Willson has announced his retirement from the NFL on Wednesday.

The Seattle Seahawks announced Wednesday that they’ve released tight end Luke Willson one day after signing him to a contract. 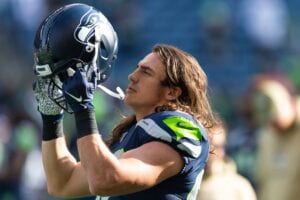 It’s odd to see a team cut a player after just one day, especially when they have long ties to the team.

Brady Henderson reports that Willson’s release had more to do with his decision than the team looking to move on. Henderson says that after practicing and studying the Seahawks’ new system, Willson decided that his heart wasn’t in it and he plans to pursue other interests instead.

The Lions signed Willson to a one-year contract worth $2.5 million for the 2018 season. He had a brief stint with the Raiders in 2019 before being cut and later returning to the Seahawks.

From there, Willson signed on to the Ravens’ practice squad last season before getting promoted in 2020. Baltimore released him and he returned to the Seahawks’ practice squad in December, where he finished the season.

In 2020, Willson appeared in eight games combined for the Ravens and Seahawks, recording one reception for 12 yards receiving and no touchdowns.