Mike Silver of NFL Media reports that multiple sources expect there to be a “shakeup” on Rams HC Sean McVay’s coaching staff after the season.

According to Silver, it’s possible changes could include moving on from defensive coordinator Wade Phillips. Beyond that, Silver says there could also be “significant” turnover in the personnel department.

Silver mentions that RB Todd Gurley‘s high salary and declining production could lead to him possibly being a cap casualty while other notable players could either be traded or released this offseason in order for the Rams to build around QB Jared Goff and DT Aaron Donald.

“I don’t know exactly what’s going to happen,” one Rams player tells Silver, “but I’d expect some major changes around here in the next few months.”

On Friday, Alex Marvez of Sirius XM NFL Radio mentioned that there’s a chance Phillips may not return as the Rams’ defensive coordinator in 2020. Should the Rams move on from him, Marvez says Rams LBs coach Joe Barry would be “strong replacement candidate” to watch.

The Rams are without their first-round pick due to the Jalen Ramsey trade, but are currently projected to have around $25 million or so of cap space to work with next year and that figure can and likely will increase once the team starts making some cuts.

We’ll have more regarding the Rams as the news is available. 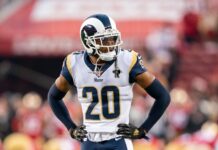 186,255FansLike
7,623FollowersFollow
279,571FollowersFollow
© NFLTradeRumors.co is an independent news source and has no affiliation with the National Football League (NFL), NFL.com, or any team(s).
wpDiscuz