The Pittsburgh Steelers have elevated LB Derrek Tuszka and WR Cody White to the active roster for Week 3, according to Ray Fittipaldo. 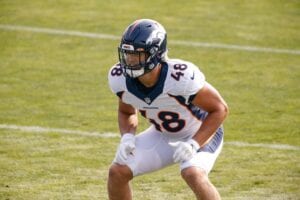 Tuszka, 24, was drafted by the Broncos in the seventh round out of North Dakota State in the 2020 NFL Draft. He signed a four-year, $3.4 million rookie deal but was waived coming out of camp and re-signed to the practice squad.

Denver eventually promoted him to their active roster but he ended up on injured reserve after appearing in nine games. The Steelers then added Tuszka to their practice squad for the 2021 season.

In 2020, Tuszka appeared in nine games for the Broncos and recorded six total tackles.