According to Ian Rapoport, the Steelers have gotten trade inquiries regarding veteran DE Melvin Ingram and appear to have engaged in some talks. 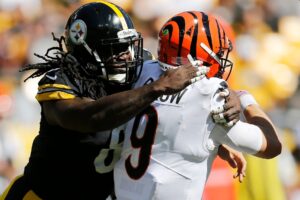 Rapoport says Ingram’s playing time has been a little inconsistent and Pittsburgh has shown a willingness to move the veteran. He was playing on a minimum base salary, making him an attractive option to other teams.

Rapoport also points out the Chiefs are one of the teams that needs edge rushing help and they showed a fair amount of interest in Ingram this offseason.

In 2021, Ingram has appeared in six games for the Steelers and recorded 10 total tackles, two tackles for loss, one sack, and one pass defense.