Gerry Dulac reports that the Steelers and QB Mason Rudolph have reached an agreement on a one-year extension through the 2022 season.

Ian Rapoport reports that Rudolph’s one-year deal is worth $5 million and includes another $4 million in incentives based on playtime.

According to Ian Rapoport, the Steelers are nearing a one-year extension for QB Mason Rudolph. 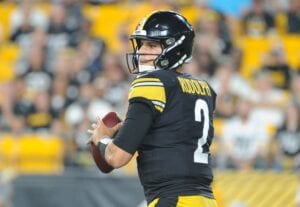 This gives Pittsburgh an option in 2022 to have at least one quarterback under contract as they potentially look at replacing Ben Roethlisberger.

Rudolph will be an unrestricted free agent following the 2022 season.

In 2020, Rudolph appeared in five games for the Steelers and made one start. He threw for 324 yards while completing 58.1 percent of his passes to go along with two touchdowns and one interception.