The Pittsburgh Steelers announced Thursday they have placed LB Robert Spillane on the COVID-19 list. 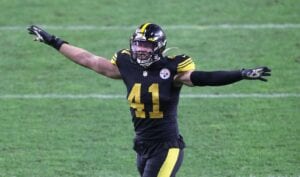 Spillane was already looking iffy for Sunday with an injury but this probably rules him out for good for Week 13.

Spillane, 25, originally signed on with the Titans as an undrafted free agent out of Western Michigan back in 2018. He was cut coming out of the preseason as a rookie and re-signed to the practice squad. Tennessee promoted him to the active roster after a month but he was waived a few weeks later.

The Steelers later signed him to a futures deal and re-signed him to their practice squad coming out of training camp. Pittsburgh eventually promoted him to the active roster. He re-signed as an exclusive rights free agent for the 2021 season.

In 2021, Spillane has appeared in 10 games for the Steelers and recorded 23 total tackles and no sacks, interceptions, forced fumbles or pass deflections.