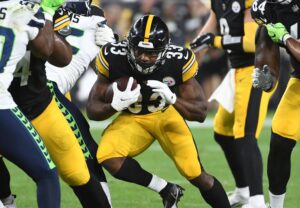 Teague, 22, wound up going undrafted out of Ohio State. He later signed a rookie contract with the Bears soon after, but was waived after just a few days in Chicago.

The Steelers signed Teague to a contract a few weeks ago, but waived him with an injury designation on Thursday.

During his college career at Ohio State, Teague rushed for 1,764 yards on 323 carries (5.5 YPC) to go along with 11 receptions for 118 yards receiving and 17 total touchdowns over the course of four years and 31 games.