Brooke Pryor reports that the Steelers are releasing TE Marcus Baugh on Saturday as the team begins to trim their roster down ahead of the 2021 season. 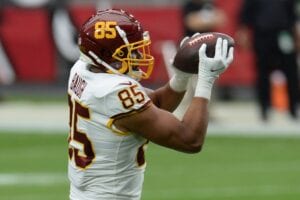 Baugh, 26, originally signed on with the Raiders as an undrafted free agent out of Ohio State back in 2018 but was cut loose coming out of the preseason before signing a one-year contract with the Panthers in April of 2019.

Unfortunately, he was waived with an injury designation coming out of the preseason and later reverted to Carolina’s injured reserve list. He was officially waived by the Panthers in February.

The Washington Football Team signed him to a contract last March and eventually added him to the practice squad in October. He bounced on and off throughout the season until being cut loose earlier this offseason.

Baugh signed with the Steelers at the end of July and was unfortunately let go ahead of the team’s final roster cuts.

In 2020, Baugh appeared in eight games for Washington and recorded one reception for two yards.