According to Jason La Canfora, multiple sources within the Washington organization believe QB Dwayne Haskins will be traded by the end of the month.

La Canfora writes the situation between Haskins and the coaching staff is already fairly toxic after the team demoted the 2019 first-round pick to third-string this week.

He also says people close to Haskins have advised him that a trade is the best option at this point given this is now the second coaching staff in as many seasons that’s not fully committed to his development.

As the third-string quarterback, Haskins would get limited reps going forward and would likely be a healthy scratch most weeks. Per La Canfora, the current coaching staff also doesn’t think he fits their system and has been rubbed the wrong way by his personality since early on.

“What they’ll tell you in that building is that he is a project who was drafted by the owner and his son,” La Canfora quotes one league source who has talked to numerous Washington staff members as saying. “That’s the bottom line there. Allen is their guy. They think he fits their system. They didn’t really want anything to do with Haskins from the beginning.”

Executives from other teams have already started doing film work on Haskins in anticipation of a trade. While it’s unlikely Washington gets much back for Haskins, it’s apparent his time with the team is nearing its expiration date.

Haskins’ contract includes a fifth-year option for Washington to pick up in 2022.

In 2020, Haskins has started four games for Washington and completed 61 percent of his passes for 939 yards to go along with four touchdowns and three interceptions. He has also rushed for 30 yards.

We’ll have more on Haskins as the news is available. 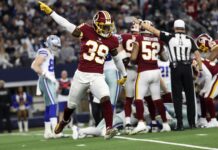 Can’t believe Washington or any other team for that matter wasted a draft pic on this guy. He is a bum maybe he should give the CFL a shot. You have to crawl before you walk.

Right ship off the Black QB with tools. Bad move here if that’s the case.I will like many who live in the Metro Area and Broadcast region. Look at the team. Same as they go with short passes for little yards. And the O Line gives them no time or protection. Like the Defence yards off?

Get the BLACK QB out of there, can’t believe they even wasted a draft pick on him