Matt Maiocco of CSN Bay Area reports that there is some support among the 49ers’ offensive players for the team to start Christian Ponder at quarterback ahead of both Blaine Gabbert and Colin Kaepernick.

“Ponder is the best option for quarterback on the roster,” a locker-room source tells Maiocco.

Maiocco’s source added that Ponder  has been more consistent than Kaepernick in practices.

49ers HC Chip Kelly said after Thursday night’s game that he plans to examine “everything” in the coming days, including the possibility of making a change at quarterback.

Blaine Gabbert struggled again on Thursday against the Cardinals, and many have wondered why they haven’t made the change to Colin Kaepernick.

Gabbert, himself, admitted that he has to play better moving forward.

Kaepernick’s conditioning has reportedly been one of the main factors, as to why he hasn’t pushed Gabbert for the starting job.

Ponder, 28, hasn’t come anywhere near the type of player the Vikings were hoping he could be when they used the No. 12 overall pick on him back in 2011. After being cut loose by the Vikings, the Raiders signed him to a one-year, $2.25 million contract. However, he was among their final roster cuts at the start of the season.

Ponder wound up signing on with the Broncos after Peyton Manning got hurt in November of last year, but he was released just a few weeks later. The 49ers signed him to a contract in August.

In 2014, Ponder appeared in just two games and threw for 222 yards while completing 50 percent of his passes to go along with no touchdowns and two interceptions.

We’ll have more regarding the 49ers’ quarterback position as the news is available. 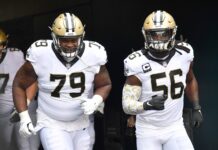