According to Ian Rapoport, Steelers OLB T.J. Watt received some good news and his pectoral muscle is not as bad as was initially feared.

Watt did not tear the muscle tendon from the bone, which would have required surgery and ended his 2022 season. Instead, Watt suffered a tear in the muscle, which will need about six weeks of rehab.

That means Watt should return sometime in the second half of the season after a stint on injured reserve, which the reigning Defensive Player of the Year acknowledged on social media.

Pittsburgh exercised Watt’s fifth-year option last offseason for $10.089 million in 2021. He then signed a four-year extension worth over $112 million with the Steelers that included $80 million fully guaranteed at signing.

The Steelers recently restructured his deal in order to create $6.75 million in cap space.

We’ll have more on Watt as the news is available. 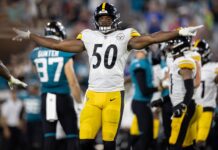