According to Aaron Wilson, the Texans are cutting RB Phillip Lindsay. 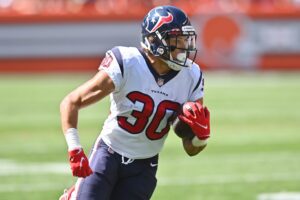 Because it is after the trade deadline, Lindsay will go on waivers and be eligible to be claimed by another team.

There were high hopes when he signed with Houston but Lindsay has so far failed to distinguish himself in a crowded Texans backfield this season, and it appears the team is ready to move on.

Lindsay, 27, wound up signing on with the Broncos as an undrafted free agent out of Colorado in 2018. He agreed to a three-year, $1.71 million contract and managed to make the 53-man roster coming out of the preseason.

Lindsay was set to be a restricted free agent in 2021, and after initially tendering him the Broncos later rescinded the offer to allow him to test free agency. The Texans signed him to a one-year deal worth $3.25 million this past March.

In 2021, Lindsay has appeared in 10 games and rushed for 130 yards on 50 carries (2.6 YPC) to go along with three receptions on four targets for 37 yards receiving and two total touchdowns.