Aaron Wilson reports that the Texans are elevating TE Jordan Akins to the active roster for Week 3, as well as S Grayland Arnold. 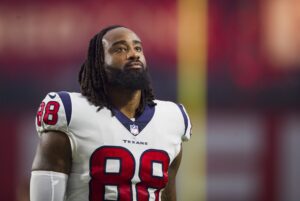 Akins, 30, was drafted by the Texans in the third round out of UCF in 2018. He just finished a four-year, $3.3 million rookie deal and was testing unrestricted free agency for the first time.

He signed with the Giants on a one-year deal this offseason but was among their roster cuts ahead of the 2022 season.

In 2021, Akins appeared in 13 games for the Texans and recorded 24 receptions on 33 targets for 214 yards and no touchdowns.