John McClain of the Houston Chronicle reports that the Texans are expected to hire Wes Welker as an offensive assistant and bring back Bobby King as their linebackers coach this week.

Last week, Welker was seen with the Texans’ coaching staff in Mobile, Alabama taking in Senior Bowl practices, so it appeared as though he could be a potential coaching addition at some point.

Welker has worked with a number of teams in recent years during training camp but this will be his first coaching opportunity since he called it a career after the 2015 season.

Welker previously worked with Texans HC Bill O’Brien for a few years while they were together in New England.

Welker, 35, began his NFL career with the Chargers back in 2004. He joined the Dolphins during his rookie season and was eventually traded to the Patriots in 2007 for a second- and seventh-round pick.

Welker played six years for the Patriots and totaled 1,000 yards receiving in five of those seasons before he departed and signed a free agent contract with the Broncos in 2013. Welker ultimately finished out his career with the Rams. 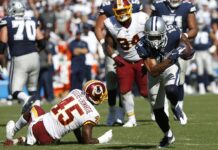