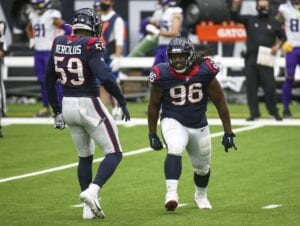 Other roster moves for Houston include:

Aaron Wilson of the Houston Chronicle previously reported that Hall suffered a torn pectoral muscle on Saturday and was going to be placed on injured reserve.

Hall, 25, is a former second-round pick of the Raiders back in 2018. Hall was traded to the Vikings but failed a physical and reverted back to the Raiders.