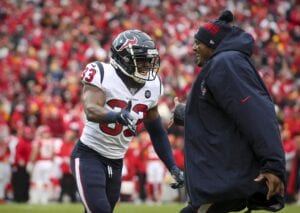 The original-round tender will cost the Texans $2.183 million for the 2021 season.

Moore, 25, wound up going undrafted out of Ole Miss back in 2018. He agreed to a three-year, $1.71 million contract with the Patriots, but was waived a few months later.

In 2020, Moore appeared in 11 games for the Texans and recorded 34 tackles, no interceptions, a forced fumble and a pass defense.