Field Yates of ESPN reports that the Texans and G Zach Fulton have agreed to a reworked contract. 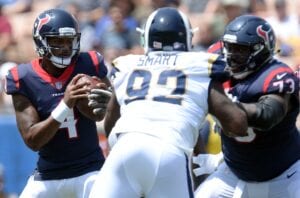 According to Yates, Fulton was due $14 million over the next two years with no guaranteed money. He now receives $5 million guaranteed in 2020 and $3 million non-guaranteed for the 2021 season.

Fulton, 28, is a former sixth-round pick of the Chiefs back in 2014. He played out his rookie contract with Kansas City before agreeing to a four-year, $28 million contract that included $13 million guaranteed with the Texans back in 2018.

In 2019, Fulton appeared in 15 games for the Texans, making 15 starts for them at guard. Pro Football Focus has him rated as the No. 63 guard out of 83 qualifying players.

186,237FansLike
7,623FollowersFollow
276,455FollowersFollow
© NFLTradeRumors.co is an independent news source and has no affiliation with the National Football League (NFL), NFL.com, or any team(s).
wpDiscuz