Aaron Wilson reports that the Houston Texans are signing CB Tremon Smith to a one-year, $1.6 million extension. Sources also tell Wilson that the deal includes $500,000 guaranteed and a $1.1 million base salary. 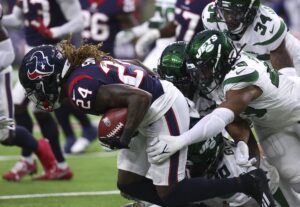 Smith, 25, is a former sixth-round pick of the Chiefs back in 2018. He signed a four-year, $2.6 million contract with Kansas City but was placed on waivers and later claimed by the Packers.

After being waived by the Packers he was signed to the Eagles’ practice squad. Philadelphia brought him back on a futures contract for 2020 before waiving him. He caught on with the Colts and signed to their practice squad after training camp.

Smith signed a one-year, $1.1 million contract with the Texans this past offseason.

In 2021, Smith has appeared in 11 games for the Texans, starting one and recording 14 tackles and one fumble recovery.