Aaron Wilson of the Houston Chronicle reports that the Texans are signing veteran LB Daren Bates following a successful tryout. 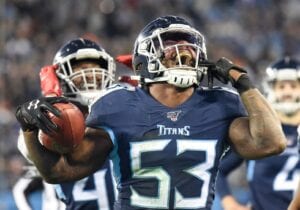 The Titans signed Bates to a three-year, $6 million back in 2017. He had been testing the open market as an unrestricted free agent this offseason.

In 2019, Bates appeared in 13 games for the Titans and recorded six tackles, a forced fumble and a recovery.