Sarah Barshop of ESPN reports that the Texans have signed RB Rex Burkhead to a contract extension through the 2022 season. 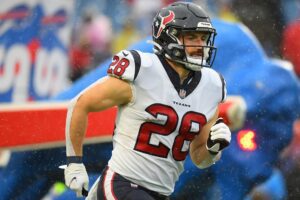 Burkhead took over as the Texans’ starting running back in Week 11 and was set to once again be an unrestricted free agent this coming offseason.

The Patriots brought Burkhead back on a three-year, $9.75 million contract in 2018. He played out the final year of his contract before signing a one-year deal with the Texans last June.