According to John McClain, the Texans will place veteran LB Zach Cunningham on waivers today. 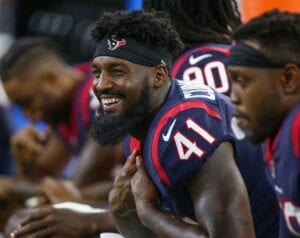 It ends a rocky season for Cunningham, who has seen his role reduced and has been benched twice for disciplinary reasons.

His name came up around the trade deadline as someone who could be available but his salary likely dissuaded teams. He had seemed to get back into the coaching staff’s good graces until he was again benched.

According to Over The Cap, cutting Cunningham saves Houston a couple hundred thousand while resulting in a $5.267 million dead cap hit.

Houston restructured Cunningham this offseason so it’s possible another team claims him. He has a $10 million base salary in 2022 but it doesn’t become guaranteed until the fifth day of that league year, meaning a team could cut him with no penalty after essentially renting him to end this season.

In 2021, Cunningham has appeared in 10 games and recorded 67 total tackles, no sacks or interceptions, one forced fumble and three pass deflections.