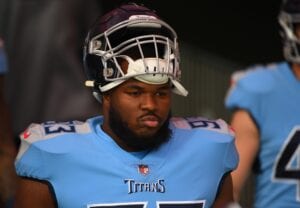 Tart finished serving a one-game suspension for an unsportsmanlike conduct violation from the team’s Week 13 game.

Tart, 23, went undrafted out of Florida International in 2020 and signed a three-year rookie contract with the Titans. He was let go by the team during final roster cuts but was signed to their practice squad before being activated back in November.

In 2020, Tart has appeared in five games for the Titans recording two tackles and one pass deflection.