The Tennessee Titans claimed C Corey Levin off of waivers from the Jets on Wednesday, per Tom Pelissero. 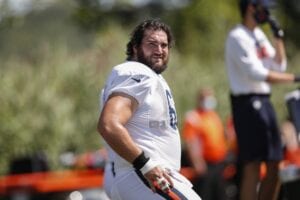 Levin, 26, is a former sixth-round pick by the Titans out of Chattanooga in 2017. He signed a four-year, $2.5 million rookie deal but was waived coming out of the 2019 preseason.

From there, Levin was claimed off of waivers by the Broncos before ending up on their practice squad. The Bears later signed him to their active roster in November of 2019 but waived him coming out of last year’s preseason.

He caught on with the Patriots practice squad but was cut after a couple of days. The Jets signed him to a contract back in April.