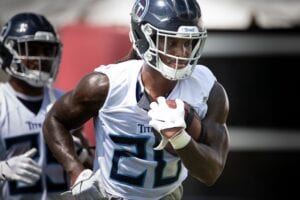 This opens a three-week window of time for the Titans to activate him from injured reserve and add him to their 53-man roster.

Perry, 29, wound up signing on with the Bears as an undrafted free agent out of Louisville back in 2014. He was waived coming out of the preseason before later signing on to the team’s practice squad.

Chicago elected to cut him loose a few weeks into the 2016 season and he had a brief stint with the Dolphins before signing on with the Bills. Buffalo placed Perry on injured reserve coming out of the preseason and later waived him with a settlement.

The Titans signed Perry to a contract this past August before placing him on injured reserve.

In 2019, Perry appeared in 11 games for the Bills and rushed for three yards on three carries to go along with one catch for one reception.