The Tennessee Titans announced Thursday that they’ve promoted P Trevor Daniel and LS Matt Overton to their active roster for their game against the Colts. 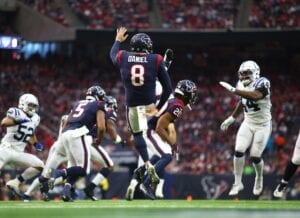 Both players will revert back to the Titans’ practice squad on Friday without having to clear waivers.

Daniel, 25, wound up going undrafted out of Tennesee back in 2018. He later signed a three-year, $1.71 million contract with the Texans, but was waived a year later.

The Broncos signed him to a futures contract late last year before waiving him following the 2020 draft. The Titans recently added him to their practice squad.

For his career, Daniel has appeared in 18 games for the Texans over the course of two seasons and totaled 3,716 yards on 85 attempts (43.7 YPA), which includes 38 punts downed inside the 20-yard-line.