According to Ian Rapoport, the Titans are restructuring QB Ryan Tannehill‘s contract to make room for new WR Julio Jones. 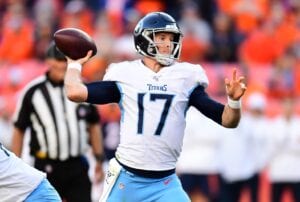 Rapoport says the Titans did a base salary to signing bonus conversion while also tacking on void years to create more than $18 million in cap space.

The Titans already had $3 million and change in space, so this gives them room to absorb Jones’ $15.3 million base salary.

Tannehill, 32, is a former first-round pick of the Dolphins back in 2012. After six seasons, Miami traded Tannehill to the Titans in 2019 for draft compensation.

As a part of the trade, Tannehill reworked his contract to a one-year, $1.875 million deal with the potential for more incentives. He then signed a four-year, $118 million deal in 2020.

In 2020, Tannehill started all 16 games for the Titans and completed 65.5 percent of his passes for 3,819 yards, 33 touchdowns and seven interceptions. He also rushed for 266 yards and seven additional touchdowns.