According to Turron Davenport, the Titans are signing OLB Wyatt Ray to their practice squad on Thursday. 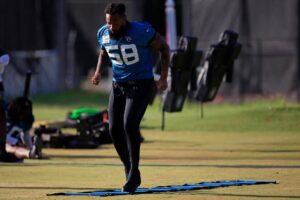 Ray was released after a month in Houston and had stints on the Bills’ and Jets’ practice squads. New York signed him to a futures contract this offseason but elected to cut him loose.

He then had a brief stint with the Titans before joining the Bengals in 2021 before signing on with the Jaguars in June but was cut loose back in August.

In 2021, Ray appeared in 15 games for the Bengals and recorded 15 tackles, one sack, and one forced fumble.