According to a report from Jeff Darlington and Adam Schefter, Buccaneers QB Tom Brady has not yet told the Buccaneers he plans to play in 2022. 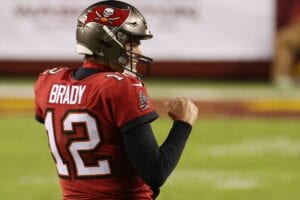 Brady has long talked about playing at age 45, which would be next season. He’s under contract and told the Buccaneers this offseason his plan was to play at least until then.

However, people close to the team and Brady tell Darlington and Schefter that Brady is noncommittal about his future right now. Ian Rapoport has also talked to people close to Brady and says not to dismiss the possibility of him retiring after this season.

Darlington and Schefter report Brady will take time after the season ends, whenever that is, to assess what he wants to do. They add there’s a feeling that if Tampa Bay wins a Super Bowl, it could increase the likelihood of Brady retiring.

The two note from the Bucs’ perspective, the relationship is going great and there’s no question they want him back, something they plan to make clear to him at the end of the season.

All three of Darlington, Schefter and Rapoport note Brady isn’t really addressing his future even with people close to him right now, as he prefers to keep the focus on Tampa Bay’s playoff run this year, one game at a time.

Brady, 44, is a former sixth-round pick of the Patriots back in 2000. He was in the final year of his two-year, $41 million contract when he agreed to another two-year extension in 2017.

In 2021, Brady appeared in all 17 games for the Buccaneers and completed 67.5 percent of his pass attempts for 5,316 yards, 43 touchdowns and 12 interceptions. He’s also rushed 28 times for 81 yards and two touchdowns.

We’ll have more on Brady as the news is available.