The New York Jets are trading veteran DT Steve McLendon to the Buccaneers, according to Rick Stroud.

Stroud adds that the Buccaneers are sending a 2020 sixth-round pick to the Jets for McLendon and a 2023 seventh-round pick. 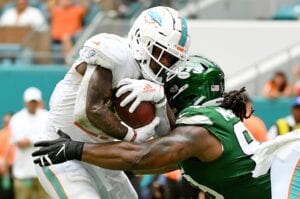 The Buccaneers lost Vita Vea for the season, which led to some speculation that they could pursue a deal for a defensive tackle.

It’s worth mentioning that McLendon played for Buccaneers DC Todd Bowles while they were together in New York.

McLendon, 34, wound up signing on with the Steelers as an undrafted free agent out of Troy back in 2010. After six years in Pittsburgh, McLendon departed in 2016 and signed a three-year, $10.5 million contract with the Jets.

McLendon returned to New York on a one-year, $2.5 million deal back in 2019 before agreeing to an extension through 2020 last year.

Entering today’s game, McLendon had appeared in four games for the Jets and recorded 10 tackles and no sacks.