Ian Rapoport reports that the Raiders are trading for Patriots OT Justin Herron, with the two teams swapping 2024 draft picks. The Patriots will send a 2024 seventh-round pick to Las Vegas for a 2024 sixth-round pick. 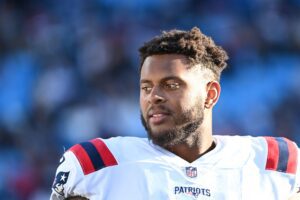 The Raiders are also waiving DB Javelin Guidry in order to make room for Herron on the roster.

In 2021, Herron appeared in 16 games for the Patriots and made four starts at tackle.