The Las Vegas Raiders are trading WR Bryan Edwards to the Falcons for an undisclosed return, according to Vincent Bonsignore. 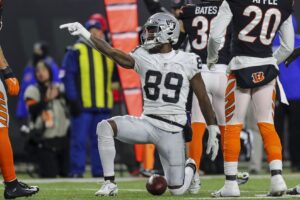 Adam Schefter confirms the news and adds that the Raiders are trading Edwards and a 2023 seventh-round pick to the Falcons for a 2023 fifth-round pick.

The Falcons could use receiver help and taking a flyer on Edwards makes some sense. It was unlikely that Edwards was going to see an expanded role with the Raiders acquiring Davante Adams this offseason.

In 2021, Edwards appeared in 16 games for the Raiders and caught 34 passes for 571 yards receiving and three touchdowns.