Ian Rapoport of NFL Media reports that the Ravens are trading OL Greg Mancz to the Dolphins as part of a late-round pick swap. 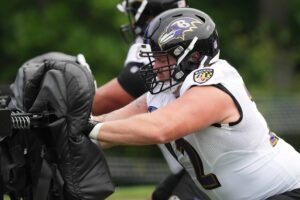 According to Jamison Hensley, the Dolphins receive Mancz and a 2022 seventh-round pick from the Ravens for a 2022 sixth-round pick.

Reports have said that Miami is focused on shoring up their offensive line depth. The Dolphins also traded for Panthers OT Greg Little in recent weeks to address the unit.

Mancz, 29, signed on with the Texans as an undrafted free agent out of Toledo back in 2015. He finished out his three-year, $1,519,059 rookie contract and was tendered with the original round designation as a restricted free agent.

Mancz signed a two-year extension that ran through the 2020 season going into 2018. However, the Texans released him coming out of camp in 2020 and he was on and off their practice squad before joining the Ravens’ taxi squad during the playoffs.

Baltimore brought Mancz back on a futures contract this past January.

In 2020, Mancz appeared in four games for the Texans.