The Minnesota Vikings claimed TE Ben Ellefson off waivers from the Jacksonville Jaguars, according to Tom Pelissero. 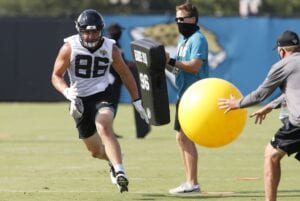 Ellefson, 25, originally signed on with the Jaguars as an undrafted free agent out of North Dakota State in 2020. He was among their final roster cuts coming out of the preseason and re-signed to their practice squad in September.

Ellefson spent the season jumping between the Jaguars’ practice squad and active roster.

In 2020, Ellefson appeared in seven games for the Jaguars, recording one catch for 10 yards and a touchdown.