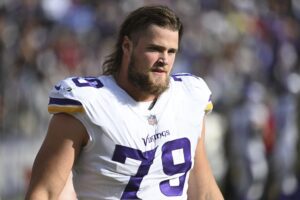 Willekes, 24, is a former seventh-round pick of the Vikings back in 2020. He was in the second year of his four-year rookie contract when the Vikings waived him coming out of the preseason last year.

The Vikings later re-signed Willekes to their practice squad and he was on and off of their active roster last year.

In 2021, Willekes appeared in six games for the Vikings and recorded 18 tackles, 2.5 sacks and a pass deflection.