Chris Tomasson of the Pioneer Press reports that around five teams have expressed interest in former Falcons DT Ra’Shede Hageman including the Vikings.

Hageman has missed the past two seasons due to legal issues, but he’s hoping to catch on with a team for the 2019 season.

“It’s been one heck of a two years sitting out and just watching my fellow teammates play, but it’s definitely a learning experience,” Hageman told Tomasson at Minnesota’s Pro Day. “The whole process is just getting back in everybody’s ear (with NFL teams) about me staying out of trouble. You can’t beat around the bush. They obviously want to see consistency with me. I’m letting everybody know that my past is my past.”

Hageman was attempting a comeback last year and worked out for the Patriots before he was arrested in June on a fourth-degree misdemeanor charge of driving while impaired.

Hageman was suspended six games for a domestic violence incident that occurred last March involving the mother of his child. He wound up sitting out the entire 2017 season.

In 2016, Hageman appeared in 12 games for the Falcons and recorded 18 total tackles and two sacks. 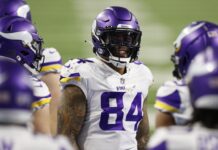 Vikings TE Irv Smith Jr. Has Thumb Surgery But Not Ruled Out For Week 1