Chris Tomasson reports the Vikings are no longer planning on signing QB Jake Browning to their practice squad.

According to Chris Tomasson, the Vikings plan to re-sign QB Jake Browning to the practice squad. 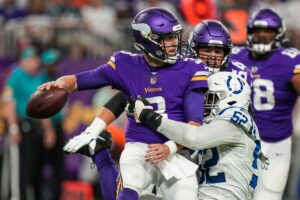 Browning cleared waivers after Minnesota cut him on Tuesday. He’s currently the only vaccinated quarterback on the Vikings’ roster.

Browning, 25, signed with the Vikings as an undrafted free agent in 2019. He was waived coming out of the preseason but re-signed to the practice squad.

Browning signed a futures deal with Minnesota for the 2020 season. He was again waived coming out of camp and spent the year on the practice squad before signing a futures deal for 2021.