Tom Pelissero of NFL Media reports that the Vikings are signing LB Nick Vigil to a one-year contract that includes over $1 million guaranteed. 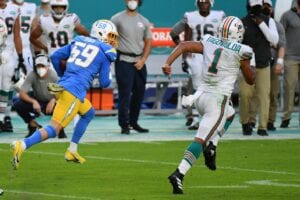 The Chargers later signed Vigil to a one-year contract for the 2020 season.

In 2020, Vigil appeared in 15 games for the Vikings and recorded 45 tackles, two sacks, a forced fumble, two recoveries and a pass defense.